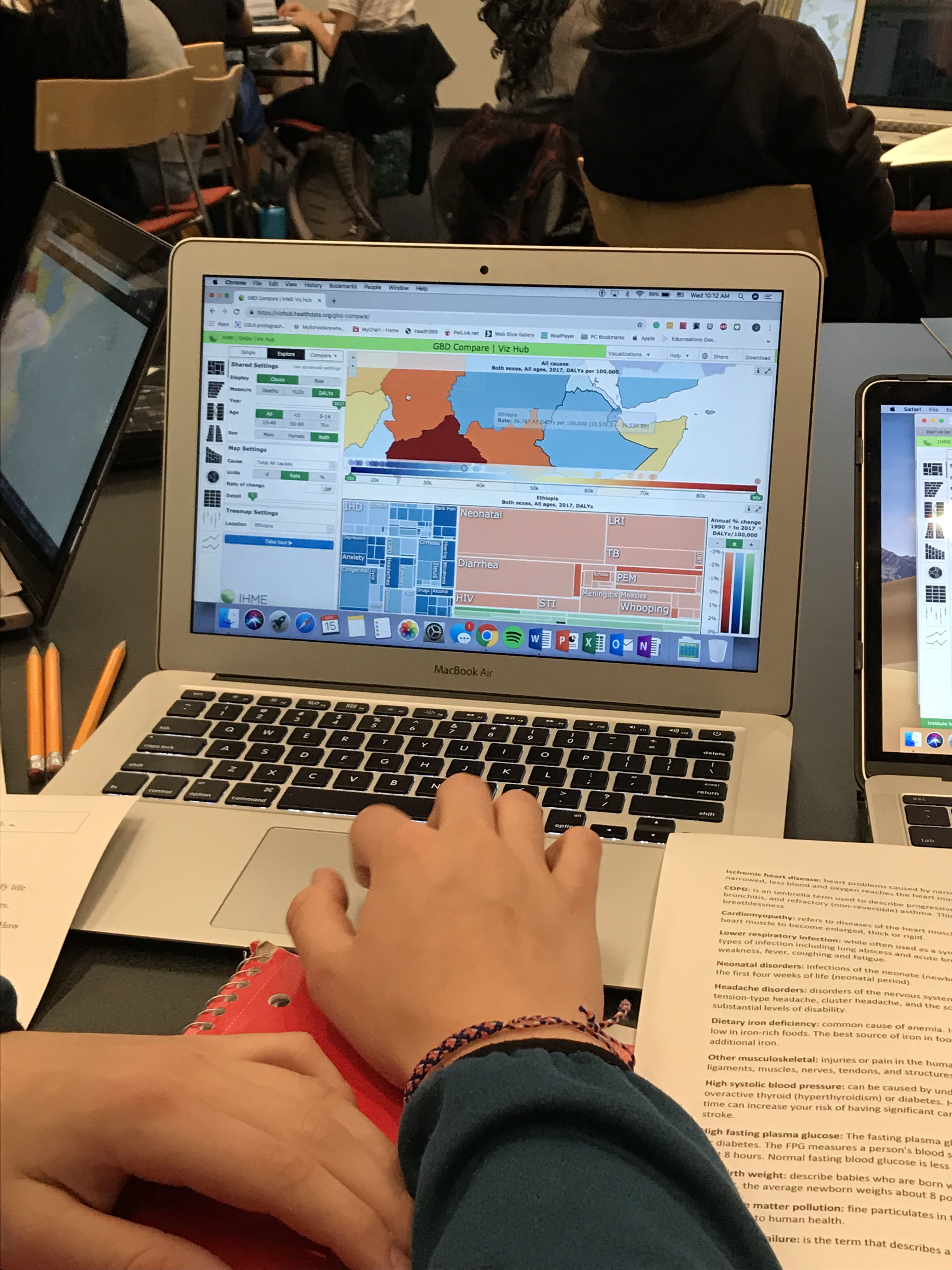 This spring, 10th grade students in the Humanities Intensive explored modern global health issues. Here's a peak at a few of their final projects.

While students are (mostly) away from campus, we’ve had the pleasure of reading final projects from this spring’s 10th grade Humanities intensives. During this interdisciplinary course, students explored modern global health issues through research, personal experiences, and partnerships with local organizations and experts. The resulting articles put forth solutions to daunting real world problems.

Students wrote memorable lead-ins to their articles. Below we’ve excerpted the first few paragraphs from three papers written under the guidance of teachers Dave Marshall and Emily Feder. In mid-July, we’ll excerpt sections from a few more projects on PrepTalk.

“As the sun beat down on a village in Northern Pakistan, Dr. Ali Saleem went door to door with his polio team trying to vaccinate children against the deadly disease. Standing in the dusty doorway of a small home, he was desperately trying to explain the importance of vaccination to a young couple and a skeptical grandfather. The grandfather, clearly the leader of the family, was reluctant to agree. Previously, Dr. Saleem had described how the polio vaccine could save their child’s life, and the pair of young parents had agreed but were unsure how to convince the old man. On that blistering hot day, Dr. Saleem did not vaccinate the child, instead deciding to return in a couple of days. On the next visit, the parents agreed to vaccinate the infant, and so he did. But when the grandfather returned home, he grabbed the infant and slammed it on the ground, furious that they had disobeyed him. Dr. Saleem was shocked and horrified: How could a simple vaccination episode go so terribly and unexpectedly wrong?” -Liam Reese ’21. From “Polio on the brink in Pakistan: The fight between eradication and vaccine hesitancy”

“I first read Linda Sue Park’s novel A Long Walk to Water as a fourth grader, and the story stays with me to this day. Inspired by true events, the novel tells the stories of 11-year-olds Salva Dut and Nya, two children growing up decades apart in present-day South Sudan. In 1985 violence forced Salva to flee his home. One of thousands of “Lost Boys” displaced by the Second Sudanese Civil War (Park 5-7, 118), he walked across several countries to find safety (“Salva’s Story”). Park weaves Salva’s true story with the fictional but realistic account of Nya, a girl growing up in Southern Sudan in 2008. Like Salva, Nya must walk to survive—every day, she treks for hours to and from a pond to collect unsafe drinking water (Park 20). The scarcity of safe drinking water in South Sudan weaves into Salva’s story as well. As an adult, Salva miraculously reunited with his father, who was severely ill from years of drinking contaminated water (Park 106). Confronted with the scarcity of safe water in his home country, Salva dedicated himself to providing people in South Sudan access to safe water. He created the organization Water for South Sudan. (“Salva’s Story”).

As a young girl who grew up with easy access to safe drinking water, I was profoundly impacted by the book. Park’s novel showed me that for millions of people like Nya, collecting water—a basic human need—is a struggle for survival. According to UNICEF, the world is in the middle of a water crisis (Lysaght). Globally, “2.1 billion people do not have access to safe drinking water” (Lysaght). Unsafe water especially prevails in sub-Saharan Africa: as of 2015, 159 million people relied on surface sources like ponds and lakes for drinking water worldwide (Progress on Drinking Water 2), and over half those people inhabited Sub-Saharan Africa (Progress on Drinking Water 2). Many surface water sources lack protection from contamination (Safely Managed Drinking Water 12), specifically contamination with feces (Slaymaker). Drinking unsafe water can cause illnesses such as cholera (“Safe Water System”), diarrhea (Selim), and infestations of parasites like guinea worms (Park 106). These maladies lead to other health problems (Selim). In South Sudan specifically, just under half the population lacked basic-classified drinking water services in 2015 (“Household Data Service Levels by Population”). But why? What causes this problem, how does it impact people, and what can be done to help?” -Mary Grace Capossela ’21. From “A Basic Human Right: Water Scarcity in Sub-Saharan Africa”

“On April 6, 1994, an airplane carrying Rwandan President Juvénal Habyarimana was shot down over Kigali airport. This assassination was just a spark that set off a murderous flame of already simmering tensions between racial groups that ultimately culminated in Genocide.  Monica, a Rwandan citizen, recalls the bloodbath that resulted from this sudden lack of governance: "I am a Hutu woman who was married to a Tutsi man. During the Genocide my family was attacked by my brothers and father – they forced me to witness them slaughtering my six children and husband with [machetes] and traditional weapons to create the maximum pain" ("The Story of Monica"). She describes further how the horrors of this atrocity still haunt her: "I can still hear their screams of pain and terror. My father was screaming at me that it was my fault the family was murdered because I married a 'snake,' the local expression describing a Tutsi" ("The Story of Monica ").

After almost one million deaths (GBD Compare) during Rwanda's 1994 genocide, the country was left in shambles, disease rates had skyrocketed, and AIDS and malaria ran especially rampant (Gates). Now, twenty-five years later, the country has made a genuinely unprecedented turnaround in terms of the population's health and overall well-being.” -Brandon Rosenberg ’21. From “A Monumental Recovery: Changes Made in Post-Genocide Rwanda”

Back to Prep Talk